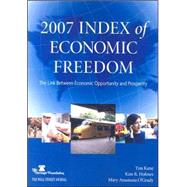 Twelve of the top 20 freest economies in the world are European. So why were there riots in Paris last year? Simple. France is not one of the top 20, suffering from low labor freedom and high unemployment. For over a decade, The Wall Street Journal and The Heritage Foundation, Washington's preeminent think tank, have tracked the march of economic freedom around the world with the influential Index of Economic Freedom. This year, the 2007 Index of Economic Freedom has been redesigned to be accessible to the congressional staffer and the college student, the finance minister and the financial adviser. The Index measures 10 freedoms - from property rights to entrepreneurship - in 157 countries. For the first time, the 2007 edition also analyzes regions to showcase the freest economies in every part of the world. Book jacket.
What is included with this book?