The Animals After Midnight 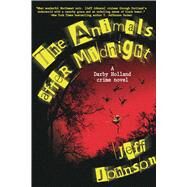 "Darby Holland is a modern hero in the mod of Sam Spade and Marlow only with more tattoos and in steel-toed boots."  —Ace Atkins, New York Times-bestselling author of Robert B. Parker's Slow Burn

In this third novel in the Darby Holland Crime Novel series, Darby's past rises up to do more than haunt him. You can run, but in the information age you can only hide for so long. Midnight Rider Productions is a dark web nightmare machine, headed by the one man who years ago drove Darby to hide in the seamy environs of Old Town and make his life there. But Darby left his own mark back in the day and the shadowy head of production has a grudge to settle. Rider has found him at long last and plans to make an example of him. Every dark secret of Darby’s is exposed, every triumph reversed, every dream made real is set on fire, and as the Feds circle, smelling blood in the water, Darby has to run the most brutal rearguard action in the history of crime-meets-crime and gamble that he has finally grown powerful enough, crazy enough, and hard enough to beat the Devil himself. Meanwhile his best friend and should-be lover Delia, is about to be married to someone with his own dark secrets. With the help of his friends new and old, Darby must save Delia and himself and the rest of the Lucky Supreme faithful as he plays one force against another with desperate brilliance in an epic conflict that rages through the dark underbelly of Portland, Oregon.
Jeff Johnson is a writer living in the Pacific Northwest. He's the author of the critically-acclaimed memoir Tattoo Machine: Tall Tales, True Stories, and My Life in Ink, as well as the novels Everything Under The Moon, Knottspeed: A Love Story, Deadbomb Bingo Ray, and the Darby Holland Crime Novel series: Lucky Supreme, A Long Crazy Burn, and The Animals After Midnight, which has been optioned for television and is in development. Visit Jeff's website at GREATPINKSKELETON.com and his blog at WillFightEvil4Food@wordpress.