Attack of the Ender Dragon 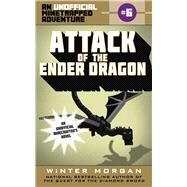 All Lily, Simon, and Michael have wanted since they were sucked into their Minecraft games is to return to the real world. They’ve battled armies of griefers and terrifying monsters, made new allies, and had their friendship tested time and again. But they’ve never forgotten their number one goal: getting back home.

In this thrilling final installment in the Unofficial Minetrapped Adventure series, a powerful lightning storm strikes the Overworld, instantly transporting Lily back to the real world! But it’s not the homecoming she had planned, especially without her friends by her side, and she’s desperate to get Michael and Simon back home and out of the game forever.

Meanwhile, Michael and Simon are in the biggest battle of their Minecraft lives, against Ender Dragons summoned by an unknown griefer. In a series conclusion you won’t want to miss, it’s the gang’s last chance to escape the Overworld—or risk being trapped for good.

Sky Pony Press, with our Good Books, Racehorse and Arcade imprints, is proud to publish a broad range of books for young readers—picture books for small children, chapter books, books for middle grade readers, and novels for young adults. Our list includes bestsellers for children who love to play Minecraft; stories told with LEGO bricks; books that teach lessons about tolerance, patience, and the environment, and much more. In particular, this adventure series is created especially for readers who love the fight of good vs. evil, magical academies like Hogwarts in the Harry Potter saga, and games like Minecraft, Terraria, and Pokemon GO. While not every title we publish becomes a New York Times bestseller or a national bestseller, we are committed to books on subjects that are sometimes overlooked and to authors whose work might not otherwise find a home.
Winter Morgan is the author of numerous children’s books including national bestseller The Quest for the Diamond Sword. She is the author of four other series for Minecraft fans: an Unofficial Gamer’s Adventure, the Unofficial League of Griefers Adventure, the Lost Minecraft Journals, and the Unofficial Minecrafters Academy. Morgan has a Minecraft-addicted son, who inspires her. She lives in Brooklyn, New York.
What is included with this book?