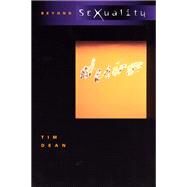 Beyond Sexualitypoints contemporary sexual politics in a radically new direction. Combining a psychoanalytic emphasis on the unconscious with a deep respect for the historical variability of sexual identities, this original work of queer theory makes the case for viewing erotic desire as fundamentally impersonal. Tim Dean develops a reading of Jacques Lacan that--rather than straightening out this notoriously difficult French psychoanalyst--brings out the queer tensions and productive incoherencies in his account of desire. Dean shows how the Lacanian unconscious "deheterosexualizes" desire, and along the way he reveals how psychoanalytic thinkers as well as queer theorists have failed to exploit the full potential of this conception of desire. The book elaborates this by investigating social fantasies about homosexuality and AIDS, including gay men's own fantasies about sex and promiscuity, in an attempt to illuminate the challenges facing safe-sex education. Taking on many shibboleths in contemporary psychoanalysis and queer theory--and taking no prisoners--Beyond Sexualityoffers an antidote to hagiographical strains in recent work on psychoanalysis, Foucault, and sexuality.
Tim Dean teaches in the Department of English and the Unit for Criticism and Interpretive Theory at the University of Illinois, Urbana-Champaign. He is author of Gary Snyder and the American Unconscious: Inhabiting the Ground.