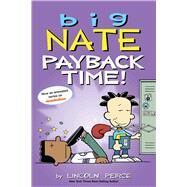 Look out, Big Nate fans, it's Payback Time! In this newest collection, Nate is up to his usual schemes and misadventures — developing a strange allergy to Mrs. Godfrey, inflating his goalkeeper statistics, and even mentoring a kid in detention. But he's not the only one creating mischief. Francis, Teddy and Chad trade blows in an ongoing snowball fight, a bully gets his just desserts, and Nate's rivalry with Gina takes a trick-or-treat twist. Nate also courts disaster after a lunch room run-in with Randy, leading to a dreaded after-school showdown. From wedgies and food fights to unrequited crushes, Big Nate: Payback Time! has it all.

Lincoln Peirce has been drawing the Big Nate comic strip for more than 25 years. Born in Ames, Iowa, Peirce grew up in Durham, New Hampshire. As a kid, he began creating his own strips in the sixth grade. Peirce taught high school in New York City and has created several animated pilots for Cartoon Network and Nickelodeon. He lives in Portland, Maine, with his family.