A Blind Guide to Normal 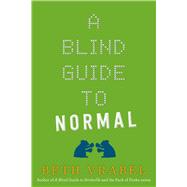 Richie "Ryder" Raymond has a gift. He can find the punchline in any situation, even in his limited vision and prosthetic eye. During the past year at Addison School for the Blind, Ryder's quick wit earned the respect and friendship of his classmates. Heading to mainstream, or "normal" school for eighth grade is going to be awesome.

After all, what's not to like? At Addison, Ryder was everyone's favorite person. He could make anyone laugh, especially his best friend Alice. So long as he can be first to make all of the one-eyed jokes, Ryder is sure he'll fit in just as quick at Papuaville Middle School, home of the Fighting Guinea Pigs. But Alice warns him fitting in might not be as easy as he thinks.

Turns out, Alice was right. In just the first hour of "normal" school, Ryder is attacked by General MacCathur II (aka, Gramps's cat), causes his bio teacher to pass out cold, makes an enemy out town hero Max, and falls for Jocelyn, the fierce girl next door who happens to be Max's girlfriend. On top of that, Ryder struggles to hold onto his dignity in the face of students' pity and Gramps's non-stop practical jokes.

Ryder quickly sees the only thing worse than explaining a joke is being the punchline. But with help from his stuck-in-the-70s Gramps and encouragement from Alice, Ryder finds the strength to not only fight back, but to make peace.

A Junior Library Guild Selection
Beth Vrabel is the award-winning author of A Blind Guide to Stinkville, A Blind Guide to Normal, and the Pack of Dorks series. She can't clap to the beat or be trusted around Nutella, but indulges in both often, much to the dismay of her family. She lives in the Dallas, Texas area.