The Bride of Lammermoor 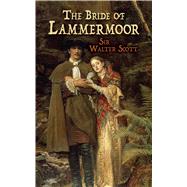 Edgar, the brooding young master of Ravenswood, retains none of his ancestral estates but a crumbling castle. Embittered by the lawsuits that have stripped him of his patrimony and shortened his despairing father's life, he determines to confront Sir William Ashton, the lawyer whose machinations led to the decline of Ravenswood's fortunes. But Edgar's plans take an abrupt turn upon meeting Sir William's lovely daughter, Lucy, and a romance blossoms against the tumultuous backdrop of the two warring families.
Sir Walter Scott's immensely popular Waverly novels enthralled readers with their dashing mix of historical fiction, romance, and revenge. This installment, originally published in 1819, takes place in the early 1700s amid Scotland's Lammermuir Hills. Edgar and Lucy's troubled relationship — beset by social, political, and religious barriers — reflects Scotland's struggles in the early 18th century, as the country and its citizens were torn asunder by the Jacobite rebellions. Scott's treatment of the lovers' inexorable destiny unfolds in a gothic atmosphere, punctuated by supernatural elements and symbolic imagery. The inspiration for Donizetti's opera Lucia di Lammermoor, this novel remains a compelling example of its author's ability to transmute the effects of historical change into literary art.
Scottish novelist, playwright, and poet Sir Walter Scott (1771–1832) enjoyed great popularity in his own day, and many of his works have withstood the test of time and are regarded as classics: Ivanhoe, Old Mortality, The Lady of the Lake, Waverly, The Heart of Midlothian, and Rob Royas well as The Bride of Lammermore.
What is included with this book?