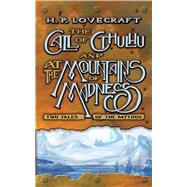 This single-volume edition features a pair of H. P. Lovecraft's best and most popular tales of horror and fantasy: "The Call of Cthulhu," praised by Conan the Barbarian creator Robert E. Howard as "a masterpiece, which I am sure will live as one of the highest achievements of literature," and "At the Mountains of Madness," hailed as "first-water, true-blue science fiction" by author Theodore Sturgeon.
Originally published by Weird Tales magazine in 1928, "The Call of Cthulhu" recounts the discovery of a mysterious box among the personal effects of a recently deceased archaeologist. The box's contents — a disturbing bas-relief sculpture and manuscripts hinting at forbidden knowledge — offer sinister clues about a secret cult and its attempts to resurrect an ancient monster that will envelop the planet in chaos. "At the Mountains of Madness," serialized in 1936 in Astounding Stories magazine, traces a disastrous expedition to the Antarctic that uncovers an abandoned city haunted by an unnamed evil. Both stories contributed to the formation of the Cthulhu Mythos, the framework for a shared universe that has inspired countless writers, musicians, readers, and visual artists. These enormously influential tales are must-reads for all fans of speculative fiction.
H. P. Lovecraft started his career writing poetry and essays but turned to fiction in 1917 and found his niche as a writer of tales of horror and the supernatural. Although he wasn't widely read during his lifetime, his reputation and readership grew quickly after his death in 1937. Often compared to Edgar Allan Poe, Lovecraft is considered to be one of the most important horror writers of the 20th century.
What is included with this book?