The Cambridge Companion to the Actress

, by Edited by Maggie B. Gale , John Stokes 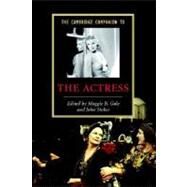 This Companion brings together sixteen new essays which examine, from various perspectives, the social and cultural role of the actress throughout history and across continents. Each essay focuses on a particular stage in her development, for example professionalism in the seventeenth century; the emergence of the actress/critic during the Romantic period and, later on, of the actress as best selling autobiographer; the coming of the drama schools which led to today's emphasis on the actress as a highly-trained working woman. Chapters consider the image of the actress as a courtesan, as a 'muse', as a representative of the 'ordinary' housewife, and as a political activist. The collection also contains essays on forms, genres and traditions - on cross dressing, solo performance, racial constraints, and recent Shakespeare - as well as on the actress in early photography and on film. Its unique range will fascinate, surprise and instruct theatre-goers and students alike.
What is included with this book?