Carl Schmitt and the Jews 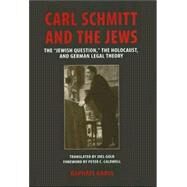 German jurist and legal theorist Carl Schmitt (18881985) significantly influenced Western political and legal thinking in the last century, yet his life and work have also stirred considerable controversy. While his ideas have been used and diffused by prominent philosophers on both the left and the right, such as Juuml;rgen Habermas and Leo Strauss, his Nazi-era past, especially his active efforts to remove Jewish influence from German law, has cast a cloud over his life and oeuvre. Still, his many supporters have generally been successful in claiming that Schmitt's was an "antisemitism of opportunity," a temporary affectation to gain favor with the Nazis. InCarl Schmitt and the Jews, available in English for the first time, historian Raphael Gross vigorously repudiates this "opportunism thesis." Through a reading of Schmitt's corpus, some of which became available only after his death, Gross highlights the importance of the "Jewish Question" on the breadth of Schmitt's work. According to Gross, Schmitt's antisemitism was at the core of his work-before, during, and after the Nazi era. His influential polarities of "friend and foe," "law and nomos," "behemoth and Leviathan," and "ketechon and Antichrist" emerge from a conceptual template in which "the Jew" is defined as adversary, undermining the Christian order with secularization. The presence of this template at the heart of Schmitt's work, Gross contends, calls for a major reassessment of Schmitt's role within contemporary cultural and legal theory.
Raphael Gross is director of the Leo Baeck Institute in London, director of the Jewish Museum in Frankfurt, and reader in history at the University of Sussex. Joel Golb is an independent editor and literary historian. He lives in Berlin.
What is included with this book?