The author of "The Homework Machine" and "Honus Me" brings his humor to a fifth-grade class that is eager for their Christmas vacation to start. However, the most unexpected thing happens. Illustrations.
That Thing That Happened

You're probably not going to believe this story. Fine. That's okay. It's a free country. You can believe what you want to believe. Or not. But I know what happened. Because I was there.

Where is "there"? Lincoln School in Oak Park, Illinois. Fifth grade. This is what my class looks like.

Well, that's what my class would look like if you were hanging from the ceiling like Michelangelo and drawing a picture of it. But I have no idea why you would want to do a crazy thing like that.

That's me, in the second row on the left side, by the window. My name is Chase. My best friend is Alex. He's on my basketball team, but we're not allowed to sit next to each other because he's always cracking jokes and distracting me. So we had to be "separated."

It's a pretty good group of kids, I guess. Well, except for Abigail, who thinks she's so great just because she's got a cool cell phone; Mia, the wet blanket; Logan, who threw my umbrella up on the roof of the school last year; and Christopher, who is just plain dumb as a box of rocks. Everybody else is relatively normal. Our teacher, Mrs. Walters, always says we're the "chattiest" group she ever had. I don't think that means we're brilliant conversationalists. It just means we talk too much.

That's her, in the front of the room. One time I saw Mrs. Walters at the supermarket and I kind of freaked out because it was like, What is my teacher doing in a supermarket?

Okay, enough setup. None of that stuff is important, anyway. The important thing to know is that if you look at the picture, that's where we all were when this thing happened that you may or may not believe. Like I said, I don't care one way or another.

It happened just before winter vacation, on December 21. That's the winter solstice, and in case you don't know what that means, it's the first day of winter and the shortest day of the year. It has something to do with the distance and angle of the sun. I'm kind of into science stuff.Anyway, everybody was excited about Christmas, Hanukkah, Kwanzaa or whatever holiday it is that they celebrate. Nobody was really focusing too much on what Mrs. Walters was saying. We were all thinking about the presents we were going to get, the ski trips we were going to go on, and the family reunions we were going to have as soon as school let out. You know, all the holiday stuff. It's a nice time of year. Mrs. Walters put cheery decorations all over the walls of the class. Everybody was feeling good.

I do remember this much -- when it happened, Mrs. Walters was talking about meteorites. She's an astronomy nut, and at night she's taking graduate classes because she's working on her Ph.D. in astrophysics. She tries to bring astronomy into everything she teaches us. Like, we'll be doing math and she'll have us adding, subtracting, multiplying, and dividing stars or planets instead of apples and oranges. Or we'll be doing health and she'll start talking about whether or not germs can survive in outer space without oxygen. I feel sorry for Mrs. Walters's family because they have to hear this stuff all the time.

Meteorites are kind of cool. You may not realize this, but there's a whole lot of stuff flying around in outer space, and it all has different names. Like, meteorites are rocks from space that hit the Earth, but meteors are still in space. Comets, meteoroids, and asteroids all orbit the sun. But meteoroids are small, asteroids are bigger, and comets have a tail. I know all this stuff because Mrs. Walters talks about it all the time.

"One day in 1998," Mrs. Walters told us, almost in a whisper, "some boys were playing basketball in a driveway in Monahans, Texas. And suddenly, they looked up and saw a meteorite come flying out of the sky! It crashed into the vacant lot next door to them. Can you imagine that? It was all over the papers and the TV news."

"That must have been cool," said David, who thinks everything is cool, even stuff that is totally uncool.

"You mean I might be outside minding my own business and a giant rock could come flying out of the sky?" asked Ashley. "That would be terrifying!"

Ashley is the kind of kid who worries about every dumb thing that could possibly happen to her. Like, what are the chances that anybody would ever get hit by a meteorite?

"Did the meteorite ruin the basketball game?" asked Jacob, who sits in front of me. I like sports too, but Jacob is obsessed. All that guy ever talks about is sports.

"I would think so!" said Mrs. Walters.

We were having this discussion when suddenly there was this loud BOOM...BOOM...BOOM outside.

I guess it could have been a sonic boom. That's the noise that an object makes when it travels faster than the speed of sound -- about 750 miles per hour -- at sea level. I looked it up in one of my science books. But it wasn't a plane. The sound was really close, like it was right outside. We all turned to look out the window. And then, maybe a second or two later, there was a crash and the window next to me just exploded! Glass was flying all over the place. Whatever it was that smashed through the window was heading straight for my desk.

Everything happened so fast after that, there wasn't a lot of time to react.

Somehow, I had the sense to cover my eyes with one arm and dive off my chair. I hit the floor next to Madison, who sits next to me. There was a lot of shouting and screaming. I didn't see anything after that.

When I finally looked up, my desk was shattered. I mean shattered. There was something half-buried in the floor underneath it. It looked like a rock, and it was about the size of a small garbage can. If I hadn't dived out of the way, it would have crushed my legs, or maybe gone right through me.

I would have been dead. 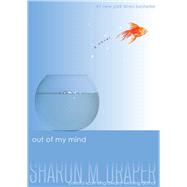 Out of My Mind
Draper, Sharon M.