Civil Rights (Super SHEroes of History) Women Who Made a Difference 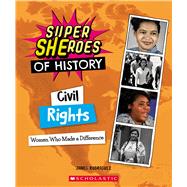 Meet the Super SHEroes of History, the women who have shaped history and society since ancient times.

From the first attempts to end slavery in the 1800s to the Civil Rights Movement of the 1950s and 1960s, women were in the forefront of the struggle to achieve equality for Black Americans. Rosa Parks in Montgomery and Viola Desmond in Canada both sparked effective mass movements that led to change, while other women led the way in educating Black voters and organizing protests such as lunch-counter sit-ins and the Freedom Rides. As soon as they could, Black women played an active role in local, state, and federal government, paving the way for more women of color than ever to sit in the U.S. Congress. This book tells the stories of the pioneers who made this possible.

From leading warriors into battle in Tang China to fighting for Civil Rights, exploring the deserts of Asia, and standing up for Indigenous peoples around the world, women have shaped history and society since ancient times. Often, however, their achievements went unrecognized. With lively text, compelling photography, and art, Super SHEroes of History brings herstory to life, illuminating the achievements of remarkable women from all backgrounds and all periods of time. The aim of this four-book series is to bring their inspiring stories to young readers  and to use engaging interactive prompts and questions to persuade them that anyone can grow up to change the world!

Janel Rodriguez is a Nuyoricanthat is, a Puerto Rican born and raised in New York City. Janel has previously written books and articles about Latina and Black American SHEroes and enjoys writing childrens fiction, too. When she isnt tapping away on her laptop, she can be found making artespecially drawing or painting portraits of people.
What is included with this book?