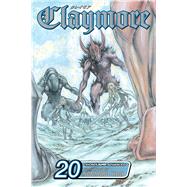 Reads R to L (Japanese Style), for audiences rated teen plus. In a world where monsters called Yoma prey on humans and live among them in disguise, humanity's only hope is a new breed of warrior known as Claymores. Half human, half monster, these silver-eyed slayers possess supernatural strength but are condemned to fight their savage impulses or lose their humanity completely. Remains of the Demon Claw Rebel Claymores Deneve, Helen and Yuma return to the Holy City of Rabona and find it under attack by Yoma hordes. An all-out battle ensues, after which Galatea informs the recently returned Claymores about Miria's solitary and likely doomed quest to bring down the Organization. As Helen and Deneve investigate in separate assays, it becomes clear that the Organization is creating novel and terrifying breeds of Yoma warriors. Meanwhile, Miria returns with an ominous scar on her forehead.
Norihiro Yagi won the 32nd Akatsuka Award for his debut work, UNDEADMAN, which appeared in Monthly Shonen Jump magazine and produced two sequels. His first serialized manga was his comedy Angel Densetsu (Angel Legend), which appeared in Monthly Shonen Jump from 1992 to 2000. His epic saga, Claymore, is running in Monthly Jump Square magazine.
What is included with this book?