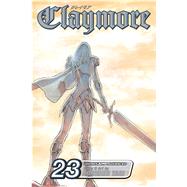 Rebel warrior Miria penetrates the headquarters of the secret Organization that created her, discovering the appalling truth about Yoma. Meanwhile, human warrior Raki joins the Claymores on the battlefield and seems closer than ever to his goal of reuniting with Clare, his Claymore companion. Yet the cycle of violence cannot be stopped—an epic battle is brewing and Priscilla, a powerful force for evil, is back in the fight!
Norihiro Yagi won the 32nd Akatsuka Award for his debut work, UNDEADMAN, which appeared in Monthly Shonen Jump magazine and produced two sequels. His first serialized manga was his comedy Angel Densetsu (Angel Legend), which appeared in Monthly Shonen Jump from 1992 to 2000. His epic saga, Claymore, is running in Monthly Jump Square magazine.
What is included with this book?