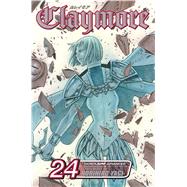 Priscilla, whose monstrous savagery was reawakened in the previous battle, is bent on absorbing the power of those who fell in her wake and destroying the rebel Claymores. Raki and several former top warriors band together with a defensive plan, but even their skills may be no match against Priscilla’s poisoned wrath. Meanwhile, the terrifying Yoma-based creature coalescing outside of the holy city of Rabona may seek to defeat Priscilla…but it may also be seeking the defeat of the rebel warriors!
Norihiro Yagi won the 32nd Akatsuka Award for his debut work, UNDEADMAN, which appeared in Monthly Shonen Jump magazine and produced two sequels. His first serialized manga was his comedy Angel Densetsu (Angel Legend), which appeared in Monthly Shonen Jump from 1992 to 2000. His epic saga, Claymore, is running in Monthly Jump Square magazine.
What is included with this book?