The Comedy of Errors Second Series 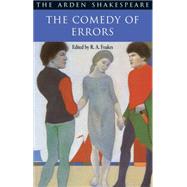 R. A. Foakesis Professor Emeritus at the University of California, Los Angeles. He has also taught or held fellowships at Yale, Birmingham, Durham, Kent, Toronto, the University of California, Santa Barbara, and the Australian National University, Canberra. His publications includeShakespeare, The Dark Comedies to the Last PlaysandIllustrations of the English Stage 1580-1642,as well as editions ofKing LearandHenry VIII for the Arden Shakespeare,Troilus and CressidaandMuch Ado About Nothingfor the New Penguin Shakespeare, andA Midsummer Night's Dreamfor the New Cambridge Shakespeare.The editor's introduction approaches the play from the technical and the critical perspectives. The technical introduction covers first printings, historical context and sources that influenced the writing, and the logistics and structure behind the play's original staging. The critical introduction looks at the characters, the tone, and the recurrent themes throughout the text. Foakes identifies the notes of compassion and the sense of disorder that are woven among the play's comic tones, and pays special attention to the different ways the humor in The Comedy of Errorshas been portrayed since Shakespeare's time. The play itself is followed by two appendices: summaries of three major textual sources and an extract from an account of The Gray's Inn Performance ofThe Comedy of Errors, which took place in 1594. The Arden Shakespearehas developed a reputation as the pre-eminent critical edition of Shakespeare for its exceptional scholarship, reflected in the thoroughness of each volume. An introduction comprehensively contextualizes the play, chronicling the history and culture that surrounded and influenced Shakespeare at the time of its writing and performance, and closely surveying critical approaches to the work. Detailed appendices address problems like dating and casting, and analyze the differing Quarto and Folio sources. A full commentary by one or more of the play's foremost contemporary scholars illuminates the text, glossing unfamiliar terms and drawing from an abundance of research and expertise to explain allusions and significant background information. Highly informative and accessible, Arden offers the fullest experience of Shakespeare available to a reader.
What is included with this book?