Confronting the Enemy Within: Security Intelligence, the Police, and Counterterrorism in Four Democracies 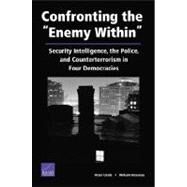 Since the September 11, 2001, terrorist attacks in the United States, critics have charged that the Federal Bureau of Investigation (FBI), while qualified to investigate terrorist incidents after the fact, is not well equipped to adequately gather and assess information to prevent attacks. More intrinsically, many believe that, given a predominant and deeply rooted law enforcement and prosecutorial culture, the bureau may not be able--or, in fact, even willing--to change operational focus toward dedicated counterterrorism intelligence gathering and analysis. To better inform debate, researchers at the RAND Corporation analyzed the domestic security services of four allied countries--the United Kingdom, France, Canada, and Australia. In each of the cases, the authors consider the organization's basic structure, its main threats, its relationship with the police, and the oversight and accountability each has with its respective government. They then weigh both the positive and negative aspects of the systems. Overall, the authors find the case studies useful as a benchmark to guide developments should a decision be made to establish a similar type of agency in the United States. (PW/PC)
What is included with this book?