Conspiracy Theories and the People Who Believe Them 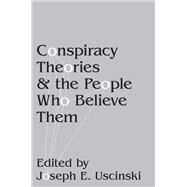 Conspiracy theories are inevitable in complex human societies. And while they have always been with us, their ubiquity in our political discourse is nearly unprecedented. Their salience has increased for a variety of reasons including the increasing access to information among ordinary people,
a pervasive sense of powerlessness among those same people, and a widespread distrust of elites. Working in combination, these factors and many other factors are now propelling conspiracy theories into our public sphere on a vast scale. In recent years, scholars have begun to study this genuinely
important phenomenon in a concerted way. In Conspiracy Theories and the People Who Believe Them, Joseph E. Uscinski has gathered forty top researchers on the topic to provide both the foundational tools and the evidence to better understand conspiracy theories in the United States and around the
world. Each chapter is informed by three core questions: Why do so many people believe in conspiracy theories? What are the effects of such theories when they take hold in the public? What can or should be done about the phenomenon? Combining systematic analysis and cutting-edge empirical research,
this volume will help us better understand an extremely important, yet relatively neglected, phenomenon.

Joseph E. Uscinski is an associate professor of Political Science in the University of Miami College of Arts & Sciences, where he teaches courses on American politics. He is coauthor of American Conspiracy Theories (Oxford, 2014) and author of The People's News: Media, Politics, and the Demands of Capitalism (New York University Press, 2014). He received his Ph.D. in American Politics from University of Arizona, his M.A. from University of New Hampshire, and his B.A. from Plymouth State College.

Chapter 1 Down the Rabbit Hole We Go!
Joseph E. Uscinski

Chapter 2 The History of Conspiracy Theory Research: A Review and Commentary
Michael Butter and Peter Knight

Section I What is a Conspiracy Theory?

Chapter 6 Conspiracy Theories and Philosophy: Bringing the Epistemology of a Freighted Term into the Social Sciences
M R. X. Dentith

Chapter 9 Learning About Conspiracy Theories: Experiences in Science and Risk Communication with the Public about the Fukushima Daiichi Disaster
Jay T. Cullen

Chapter 10 In Whose Hands the Future?
Stephan Lewandowsky

Section IV What is the Psychology of Conspiracy Theorizing?

Chapter 18 The Truth is Around Here Somewhere: Integrating the Research on Conspiracy Beliefs
Preston R. Bost

Section V What Do Conspiracy Theories Look Like in the United States?

Section VI What Do Conspiracy Theories Look Like Around the World?

Chapter 22 Who Believes in Conspiracy Theories in Great Britain and Europe?
Hugo Drochon

Chapter 27 The Hidden and the Revealed: Styles of Political Conspiracy Theory in Kirchnerism
Tanya Filer

Section VII How Should We Live with Conspiracy Theories?