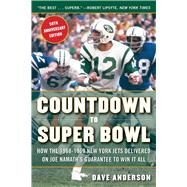 “Superb . . . cinematic . . . .A game that provided rich symbolism for the victories of a new league and of a controversial quarterback.” —The New York Times

Countdown to Super Bowl tells the whole story of the game of the century, written by the man who followed every movement of the Jets from the first kick-off of the season, who lived, breathed, and agonized with them for the ten nerve-tingling days before the Colts went down to defeat in the Super Bowl.

Here, by Dave Anderson of the New York Times, is the play-by-play, moment-by-moment saga of how Super Joe Namath and the Jets made good Namath’s boast that they would humble the NFL and vanquish the invincible Colts.

This book provides all the color, the action, and the behind-the-scenes drama of the greatest upset in football history.

In celebration of the fiftieth anniversary of that miraculous New York Jets Super Bowl win, fans can relive the stories and moments that led up to that victory.
Dave Anderson joined the New York Times in 1966 after working at the New York Journal-American and the Brooklyn Eagle. He became a Sports of The Times columnist in 1971 and won a Pulitzer Prize for distinguished commentary in 1981. Among many other honors, he was inducted into the National Sports Writers and Sportscasters Hall of Fame in 1990 and in 1991 received the Red Smith Award for contributions to sports journalism from the Associated Press Sports Editors.