Court of the Dead 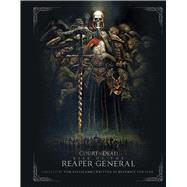 Embark on a journey through the darkly bizarre and magical Underworld in this gorgeously illustrated origin story.

In the dark fantasy universe of Court of the Dead, the savage war between Heaven and Hell is a futile stalemate fueled by the souls of mortals, whose purpose of existence has been twisted into nothing more than raw material for the harvest. Yet in seeking to transcend his grim duty in order to return meaning and inspiration to the cosmos, Death and his Court are cast as humanity's unlikely saviors.

Into this dramatic setting are born Demithyle and his fellow reapers, whose first task is to confront the ever-advancing scourge of the vicious bael reiver hordes, ravenous and destructive wraiths who threaten to destroy the Underworld and end the Court's struggle before it begins. Join Demithyle as he evolves from humble foot soldier to reluctant captain, encountering many strange and wondrous characters and places, and finally accepts the mantle of the exalted Reaper General in order to lead to victory the Underworld's last, best hope for salvation.
Tom Gilliland has led the creative direction of Sideshow Collectibles for the last 17 years. A head full of D&D and heavy metal imagery, coupled with a near-death experience, have formed the genesis of Tom's exploration of the darker aspects of heroism, along with an appreciation for the twisted and subversive. All these elements were paramount in his creation of the world of Court of the Dead.
What is included with this book?