The Crossed-Out Notebook A Novel 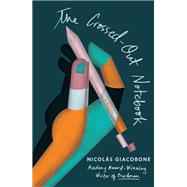 From the Academy Award-winning cowriter of Birdman, a wonderfully eccentric, suspenseful debut in the tradition of Misery and Kiss of the Spiderwoman about a screenwriter kidnapped by a world-famous director who orders him to compose a masterpiece.

Pablo, a failed Argentine novelist-turned-screenwriter, has been kidnapped by the greatest Latin American film director of all time and is kept in a basement where he works, day after day, on what he is told must at all costs be a great, world-changing screenplay. Every night, after finishing work on the script, Pablo writes in his notebook and every morning he crosses out what he wrote the night before. The Crossed-Out Notebook is Pablo’s diary of this time: being brought food by a maid; being threatened with a gun; vociferously arguing with the director about what he’s written the previous day.

The clash between the two men and their different approaches leads to a movie being made, a gun going off, an unlikely escape, and a final confrontation. In the end, The Crossed-Out Notebook is a darkly funny novel full of intrigue and surprise about the essence of the creative process; a short, crazy ode to any artist whose brilliance shines through strangeness and adversity.
Nicolás Giacobone was born in Buenos Aires, Argentina, in 1975. He shared an Academy Award and Golden Globe for cowriting Birdman, which also won the Academy Award for Best Picture. He is the author of the novel The Crossed-Out Notebook.

Megan McDowell has translated many contemporary authors from Latin America and Spain, including Nicolás Giacobone, Alejandro Zambra, Samanta Schweblin, Mariana Enriquez, Gonzalo Torné, Lina Meruane, Diego Zuñiga, and Carlos Fonseca. Her translations have been published in The New Yorker, Tin House, The Paris Review, Harper’s, McSweeney’s, Words Without Borders, and VICE, among others.