A Darkness Forged in Fire Book One of the Iron Elves 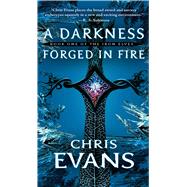 
Now in mass market, the first novel in the thrilling series of epic storytelling and adventure reminiscent of J.R.R. Tolkien and Bernard Cornwell...where musket and cannon, bow and arrow, and magic and diplomacy all wield power in an empire teetering on the brink of war.

In this world, Konowa Swift Dragon, former commander of the Empire’s elite Iron Elves, is anything but ordinary. He’s murdered a Viceroy, been court-martialed, seen his beloved regiment disbanded, and finally been banished in disgrace to the one place he despises the most—the forest. All he wants is to be left alone with his misery...but for Konowa, nothing is ever that simple. Brimming with high adventure and intrigue, this is "a splendid read for fans of both science fiction and fantasy military adventure. Highly recommended" (Library Journal).
Chris Evans is also the author of the Iron Elves saga: A Darkness Forged in Fire, The Light of Burning Shadows, and Ashes of a Black Frost, as well as Of Bond and Thunder, and the nonfiction book Bloody Jungle: The War in Vietnam. He is a military historian and former editor for Random House and Stackpole Books. Born in Canada, he lives in New York City.
What is included with this book?