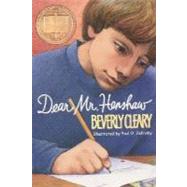 I wish somebody would stop stealing the good stuff out of my lunchbag. I guess I wish a lot of other things, too. I wish someday Dad and Bandit would pull up in front in the rig ... Dad would yell out of the cab, "Come on, Leigh. Hop in and I'll give you a lift to school."

Leigh Botts has been author Boyd Henshaw's number one fan ever since he was in second grade. Now in sixth grade, Leigh lives with his mother and is the new kid at school. He's lonely, troubled by the absence of his father, a cross-country trucker, and angry because a mysterious thief steals from his lunchbag. Then Leigh's teacher assigns a letter-writing project. Naturally Leigh chooses to write to Mr. Henshaw, whose surprising answer changes Leigh's life.

Winner of the Newbery Medal An ALA Notable Book

"Capably and unobtrusively structured as well as valid and realistic." - Kirkus Reviews