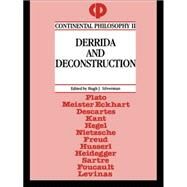 The effects of Derrida's writings have been widespread in literary circles, where they have transformed current work in literary theory. By contrast Derrida's philosophical writings--which deal with the whole range of western thought from Plato to Foucault--have not received adequate attention by philosophers. Organized around Derrida's readings of major figures in the history of philosophy, Derrida and Deconstruction focuses on and assesses his specifically philosophical contribution. Contemporary continental philosophers assess Derrida's account of philosophical tradition, with each contributor providing a critical study of Derrida's position on a philosopher she or he has already studied in depth These figures include Plato, Meister Eckhart, Descartes, Kant, Hegel, Nietzsche, Freud, Husserl, Heidegger, Sartre, and Foucault.
What is included with this book?