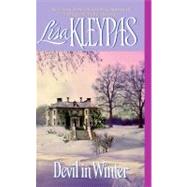 In this third entry of Kleypas's Wallflower quartet, heiress Evie Jenner is desperate to escape from her cruel relatives and proposes marriage to the rakish Viscount St. Vincent. However, she does not expect to fall in love. Original.
What is included with this book?

As Sebastian, Lord St. Vincent, stared at the young woman who had just barged her way into his London residence, it occurred to him that he might have tried to abduct the wrong heiress last week at Stony Cross Park.

Although kidnapping had not, until recently, been on Sebastian's long list of villainous acts, he really should have been more clever about it.

In retrospect Lillian Bowman had been a foolish choice, though at the time she had seemed the perfect solution to Sebastian's dilemma. Her family was wealthy, whereas Sebastian was titled and in financial straits. And Lillian herself had promised to be an entertaining bed partner, with her dark-haired beauty and her fiery temperament. He should have chosen far less spirited prey. Lillian Bowman, a lively American heiress, had put up fierce resistance to his plan until she had been rescued by her fiancé, Lord Westcliff.

Miss Evangeline Jenner, the lamblike creature who now stood before him, was as unlike Lillian Bowman as it was possible to be. Sebastian regarded her with veiled contempt, pondering what he knew of her. Evangeline was the only child of Ivo Jenner, the notorious London gambling club owner, and a mother who had run off with him -- only to quickly realize her mistake. Though Evangeline's mother had come from decent lineage, her father was little better than gutter scum. Despite the inglorious pedigree, Evangeline might have made a decent enough match if not for her crippling shyness, which resulted in a torturous stammer.

Sebastian had heard men say grimly that they would wear a hair shirt until their skin was bloody rather than attempt a conversation with her. Naturally Sebastian had done his utmost to avoid her whenever possible. That had not been difficult. The timid Miss Jenner was wont to hide in corners. They had never actually spoken directly -- a circumstance that had appeared to suit both of them quite well.

But there was no avoiding her now. For some reason Miss Jenner had seen fit to come uninvited to Sebastian's home at a scandalously late hour. To make the situation even more compromising, she was unaccompanied -- and spending more than a half minute alone with Sebastian was sufficient to ruin any girl. He was debauched, amoral, and perversely proud of it. He excelled at his chosen occupation -- that of degenerate seducer -- and he had set a standard few rakes could aspire to.

Relaxing in his chair, Sebastian watched with deceptive idleness as Evangeline Jenner approached. The library room was dark except for a small fire in the hearth, its flickering light playing gently over the young woman's face. She didn't look to be more than twenty, her complexion fresh, her eyes filled with the kind of innocence that never failed to arouse his disdain. Sebastian had never valued or admired innocence.

Though the gentlemanly thing would have been for him to rise from his chair, there seemed little point in making polite gestures under the circumstances. Instead, he motioned to the other chair beside the hearth with a negligent wave of his hand.

"Have a seat if you like," he said. "Though I shouldn't plan to stay long if I were you. I'm easily bored, and your reputation is hardly that of a scintillating conversationalist."

Evangeline didn't flinch at his rudeness. Sebastian couldn't help but wonder what kind of upbringing had inured her so thoroughly to insult, when any other girl would have flushed or burst into tears. Either she was a pea wit, or she had remarkable nerve.

Removing her cloak, Evangeline draped it over one arm of the velvet-upholstered chair, and sat without grace or artifice. Wallflower, Sebastian thought, recalling that she was friends not only with Lillian Bowman, but also with Lillian's younger sister, Daisy, and with Annabelle Hunt. The group of four young women had sat at the side of numerous balls and soirees all last season, a band of perpetual wallflowers. However, it seemed that their bad luck had changed, for Annabelle had finally managed to catch a husband, and Lillian had just brought Lord Westcliff up to scratch. Sebastian doubted that their good fortune would extend to this bumbling creature.

Though he was tempted to demand her purpose in visiting him, Sebastian feared that might set off a round of prolonged stammering that would torment them both. He waited with forced patience, while Evangeline appeared to consider what she was about to say. As the silence drew out, Sebastian watched her in the gamboling firelight, and realized with some surprise that she was attractive. He had never really looked at her directly, had only received the impression of a frowsy red-haired girl with bad posture. But she was lovely.

As Sebastian stared at her, he became aware of a slight tension building in his muscles, tiny hairs rising on the back of his neck. He remained relaxed in his chair, though the tips of his fingers made slight depressions in the soft-napped velvet upholstery. He found it odd that he had never noticed her, when there was a great deal worth noticing. Her hair, the brightest shade of red he had ever seen, seemed to feed on the firelight, glowing with incandescent heat. The slender wings of her brows and the heavy fringe of her lashes were a darker shade of auburn, while her skin was that of a true redhead, fair and a bit freckled on the nose and cheeks. Sebastian was amused by the festive scattering of little gold flecks, sprinkled as if by the whim of a friendly fairy. She had unfashionably full lips that were colored a natural rose, and large, round blue eyes . . . pretty but emotionless eyes, like those of a wax doll.

"I r-received word that my friend Miss Bowman is now Lady Westcliff," Evangeline remarked in a careful manner. "She and the earl went on to Gr-Gretna Green after he . . . dispatched you."

Devil in Winter. Copyright © by Lisa Kleypas. Reprinted by permission of HarperCollins Publishers, Inc. All rights reserved. Available now wherever books are sold.

Excerpted from Devil in Winter by Lisa Kleypas
All rights reserved by the original copyright owners. Excerpts are provided for display purposes only and may not be reproduced, reprinted or distributed without the written permission of the publisher.