Down to Earth Politics in the New Climatic Regime 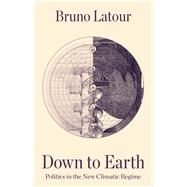 The present ecological mutation has organized the whole political landscape for the last thirty years. This could explain the deadly cocktail of exploding inequalities, massive deregulation, and conversion of the dream of globalization into a nightmare for most people.
What holds these three phenomena together is the conviction, shared by some powerful people, that the ecological threat is real and that the only way for them to survive is to abandon any pretense at sharing a common future with the rest of the world. Hence their flight offshore and their massive investment in climate change denial.
The Left has been slow to turn its attention to this new situation. It is still organized along an axis that goes from investment in local values to the hope of globalization and just at the time when, everywhere, people dissatisfied with the ideal of modernity are turning back to the protection of national or even ethnic borders.
This is why it is urgent to shift sideways and to define politics as what leads toward the Earth and not toward the global or the national. Belonging to a territory is the phenomenon most in need of rethinking and careful redescription; learning new ways to inhabit the Earth is our biggest challenge. Bringing us down to earth is the task of politics today.
Bruno Latour is one of the world’s leading sociologists and anthropologists. He taught at the École des Mines in Paris from 1982 to 2006 and he is now Professor and Vice-President for Research at Institut d'études politiques (Sciences Po). His many books include Laboratory Life, We Have Never Been Modern, Reassembling the Social and Facing Gaia.
1. A hypothesis as political fiction: the explosion of inequalities and the denial of climate change are one and the same phenomenon.

2. Thanks to America’s abandonment of the climate agreement, we now know clearly what war has been declared.

3. The question of migrations now concerns everyone, offering a new and very wicked universality: finding oneself deprived of ground.

5. How the globalist ruling classes have decided to abandon all the burdens of solidarity, little by little.

6. The abandonment of a common world leads to epistemological delirium

7. The appearance of a third pole undoes the classical organization of modernity torn between the first two poles, the Local and the Global.

8. The invention of “Trumpism” makes it possible to identify a fourth attractor, the Out-of-This-World.

9. In identifying the attractor we can call Terrestrial, we identify a new geopolitical organization.

10. Why the successes of political ecology have never been commensurate with the stakes.

11. Why political ecology has had so much trouble breaking away from the Right/Left opposition.

12. How to ensure the relay between social struggles and ecological struggles.

13. The class struggle becomes a struggle among geosocial positions.

14. The detour by way of history makes it possible to understand how a certain notion of “nature” has immobilized political positions.

15. We must succeed in breaking the spell of “nature” as it has been pinned down by the modern vision of the Left/Right opposition.

17. The sciences of the Critical Zone do not have the same political functions as those of the other natural sciences

19. A new attempt at describing dwelling placesÑFrance’s ledgers of complaints as a possible model.

20. A personal defense of the Old Continent.