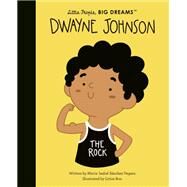 In this book from the critically acclaimed, multimillion-copy bestselling Little People, BIG DREAMS series, discover the true story of Dwayne 'The Rock' Johnson.

Born into a family of Samoan and Black wrestlers, little Dwayne travelled with his parents and watched his family fight in the ring, but he much preferred the football field to wrestling! He trained hard and worked to become a football player, signing with the Calgary Stampeders as a linebacker. But he was cut from the team after just two months.

A natural athlete, Dwayne decided to follow in the footsteps of his father and grandfather and decided to pursue professional wrestling. Taking on the persona of 'The Rock' as a wrestler in the WWE, he won 16 championships and millions of fans. After a huge wrestling career, he tried his hand at acting... andtoday is one of the biggest film stars that Hollywood has ever seen!

This inspiring book features stylish and quirky illustrations and extra facts at the back, including a biographical timeline with historical photos and a detailed profile of the athlete and actor's life.

Little People, BIG DREAMS is a bestselling series of books and educational games that explore the lives of outstanding people, from designers and artists to scientists and activists. All of them achieved incredible things, yet each began life as a child with a dream.

This empowering series offers inspiring messages to children of all ages, in a range of formats. The board books are told in simple sentences, perfect for reading aloud to babies and toddlers. The hardback versions present expanded stories for beginning readers. Boxed gift sets allow you to collect a selection of the books by theme. Paper dolls, learning cards, matching games and other fun learning tools provide even more ways to make the lives of these role models accessible to children.

Inspire the next generation of outstanding people who will change the world with Little People, BIG DREAMS!

Maria Isabel Sánchez Vegara, born in Barcelona, Spain, is a writer and creative director in constant search of new concepts for children’s books and the author of the multimillion-copy best-selling Little People, BIG DREAMS series of picture books that explore the lives of outstanding people. Working for more than fifteen years for clients in top advertising agencies, her books combine creativity with learning, aiming to establish a new and fresh relationship between children and pop culture. ​

Lirios Bou started drawing professionally in 2014 and since then, her drawings have been used mainly in educational books, magazines, and children’s books. Her style is clean and simple, always using plain colours and rounded shapes, and she works mostly with digital tools. Nowadays, she lives in Valencia, and shares her studio with Blai, her adorable/crazy dog.