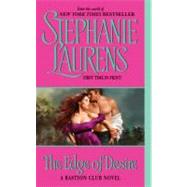 They proved their bravery fighting for His Majesty's Secret Service and were rewarded with brides of great beauty and breeding. But one member of the Bastion Club has remained a bachelor--until now. Original.
The Edge of Desire

He should make her wait.

Thoughts and wild conjecture roiling in his head, Christian Michael Allardyce, 6th Marquess of Dearne, slowly descended the stairs of the Bastion Club. He'd been nursing a brandy and his despondency in the library when Gasthorpe, the club's majordomo, had appeared with a note.

A note summoning him to face his past.

That past awaited him in the front parlor, the room he and the club's other six owners—all ex-members of one of the more secret and select arms of His Majesty's services who had established the club as their bolt hole against the importuning ladies of the ton—had stipulated as the only room in which ladies were to be permitted. In the months since the club's opening, that rule had, incident by incident, fallen by the wayside, but Gasthorpe had rightly shown this particular lady into the formal front parlor.

He really should make her wait.

She'd said she would, twelve years ago, but then another had come along, and while he'd been buried deep in Napoleon's Europe, she'd lightly thrown aside her promise to him, and fallen in love with and married a Mr. George Randall.

She was now Lady Letitia Randall.

Instead of the Marchioness of Dearne.

Deep in his heart, where nothing and no one any longer touched, he still felt betrayed.

She'd been Lady Letitia Randall for eight years. Although he'd returned to England ten months ago, and he and she moved in the same, very small circle, they'd exchanged not one word. They hadn't even exchanged nods. Even that was too much to expect of him, given their past. She seemed to understand that; coolly detached, haughtily distant, as if he and she had never been close—never been lovers—she'd studiously kept her distance.

I need your help. There's no one else I can turn to.

That was all the words her note had contained, yet between them those bare words spoke volumes.

His feet continued steadily down the treads. He should make her wait, yet he couldn't imagine what had brought her there. Nor could he imagine why his staff at Allardyce House in Grosvenor Square had divulged his whereabouts. His butler, Percival, was a paragon of his calling; nothing short of a force of nature would have induced him to disobey his master's express orders.

Then again, the lady presently occupying the front parlor had qualified as such from her earliest years.

Stepping off the last tread, he studied the parlor door. It was closed. He could turn around and retreat, and let her wait for at least ten minutes. Even fifteen. The desperation in her plea guaranteed she would wait. Not meekly—meek wasn't in her repertoire—but she would grit her teeth and remain until he deigned to see her.

Some part of him wanted to hurt her—as she'd hurt him, as he still hurt. Despite the years, the wound was raw; it still bled.

The faint elusive scent of jasmine drew him to the door.

It was curiosity, he told himself, that had him reaching for the handle. Not the incredible, irresistible attraction that had from the first drawn them together—that even after twelve years of neglect and eight years of disillusion still arced across a crowded ballroom.

And made him ache.

Opening the door, steeling himself, he went in.

The first surprise was her weeds. He paused in the doorway, rapidly assessing.

Seated in one of the armchairs flanking the small hearth, the chair facing the door, she was clothed in unrelieved funereal black, dull and . . . On any other lady it would have looked somber. On her . . . even fully veiled as she was, the depressing hue did nothing to dim her vitality. It screamed in every line of her svelte form, a humming, thrumming energy, harnessed to some degree but forever in danger of escaping—exploding; she only had to move a gloved hand to instantly attract and fix any man's attention.

She demonstrated; raising both hands, long slender palms and delicate fingers encased in fine black pigskin, she gripped the edge of the black veil and lifted it, setting it back over her piled hair.

So he could see her face.

Finely drawn features, a pair of ruby lips sculpted by a master, the lower lush and full and tempting. Large, almond-shaped eyes, their color an infinitely changeable medley of greens and golds, set above high, chiseled cheekbones. Lush dark lashes, a straight, patrician nose, all set in a oval of perfect porcelain skin.

The catalog of her features didn't do her face justice; it was the epitome of feminine aristocratic beauty not solely because of its composition but also because of her animation. In repose her face was serenely beautiful; awake, her expressions were startlingly vivid.

That afternoon, however, her expression was . . . contained.

He frowned. Stepping into the room, he closed the door. "Your father?"

He'd assumed the full mourning signified that her father, the Earl of Nunchance, had passed on. But if the head of the House of Vaux had died, the ton would have been abuzz with the news. Not only had he heard not a whisper, but Letitia's face, naturally pale, held no hint of sorrow; if anything, she seemed to be reining in her temper.

Not her father, then. Regardless of the familial disruptions that were commonplace among the Vaux, she was sincerely fond of her eccentric sire.

Her perfectly arched dark brows drew down, a slight frown that informed him he was being slow-witted.

The sound of her voice rocked him. He'd forgotten how long it had been since he'd heard it. Low-toned, with just the faintest natural rasp, it was a voice that evoked visions of sin.

Regardless, today those tones carried a certain tension. She drew in a tight breath, then bluntly stated, "Randall has been murdered."

The Edge of Desire. Copyright © by Stephanie Laurens. Reprinted by permission of HarperCollins Publishers, Inc. All rights reserved. Available now wherever books are sold.

Excerpted from The Edge of Desire by Stephanie Laurens
All rights reserved by the original copyright owners. Excerpts are provided for display purposes only and may not be reproduced, reprinted or distributed without the written permission of the publisher.