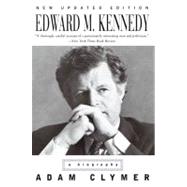 The life of Edward M. Kennedy is a chronicle of our country's past fifty years. An authoritative and wonderfully readable biography, Edward M. Kennedy brings to life one of the most accomplished and fascinating men to walk the halls of Capitol Hill. Drawing on interviews with the Senator and those close to him, Adam Clymer follows Kennedy through his highs and lows-through Chappaquiddick, his public divorce, and his relationship with political figures such as the Clintons, George W. Bush, and Barack Obama-placing Kennedy's career in a historical perspective and observing how his family legacy has affected his political performance.
What is included with this book?