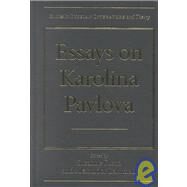 Poet and novelist Karolina Karlovna Pavlova (or Caroline von Pawloff, as she signed her works and letters during the German period of her life) is remembered as one of the major writers of Russia's middle Golden Age. In the West, specifically in the United States and Germany, interest in Pavlova has been growing quietly for twenty years.

The essays in this volume, by scholars in the U.S., Russia, and Germany, range widely not only over Pavlova's oeuvre but also in their analytical stances. The volume includes close poetic and prosodic analysis, literary history, gender studies, intertextual comparison, and biography. Pavlova was a brilliant lyric poet; a masterly translator of Russian, French, and German poetic works; and the author of A Twofold Life, an enigmatic novel about a young woman's coming of age, written in satirical prose and romantically impassioned verse. All these aspects of her work are given detailed attention, especially A Twofold Life, to which four of the essays are devoted. Pavlova's legacy in the works of the major twentieth-century write