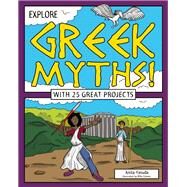 Architecture, democracy, the Olympics—the modern world owes a lot to the ancient Greeks! In Explore Greek Myths! With 25 Great Projects, readers embark on a fascinating journey to explore the myths that infused ancient Greek culture, civilization, and innovation. Readers will learn how these myths, popular more than 3,000 years ago, have provided fundamental support to today's art, architecture, mathematics, science, philosophy, literature, and government.

Readers will read about the adventures of many Greek gods, such as Zeus, who could throw lightning bolts and Athena, who personally protected the city of Athens. Readers will also meet great heroes, including the mighty Heracles, Perseus, who freed a princess chained to a rock, and Odysseus, who battled with a one-eyed giant called a Cyclopes. These characters and creatures serve to both entertain and offer lessons in morality, while also explaining the natural phenomenon that the ancient Greeks had no scientific explanation for.

The lively text, surprising fun facts, jokes, and colorful illustrations encourage children to explore Greek mythology and make connections to our modern culture and language. Hands-on activities include making a topographical map of ancient Greece and designing Greek columns, while links to online primary sources encourage readers to explore the topic independently.
Anita Yasuda is the author of more than 100 books for children and adults, including Explore Simple Machines!, Explore Native American Cultures!, and Astronomy: Cool Women in Space for Nomad Press. She is a member of the Society of Children’s Books Writers & Illustrators (SCBWI) and the Canadian Society of Children’s Authors, Illustrators and Performers (CANSCAIP). Anita lives in Huntington Beach, CA.