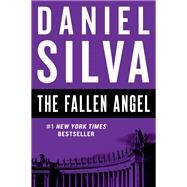 "Silva builds tension with breathtaking double and triple turns of plot." -People Magazine "Intelligence is the factor that has distinguished Silva's espionage novels." -Maureen Corrigan, NPR Art restorer, assassin, spy-Gabriel Allon returns in The Fallen Angel, another blockbuster espionage thriller from #1 New York Times bestselling author Daniel Silva. The acclaimed author of Portrait of a Spy, Silva ("a world class practitioner of spy fiction" -Washington Post) is an undisputed master of the genre who has brought "new life to the international thriller" (Newsday). A breathtaking adventure that races around the globe, The Fallen Angel begins in Rome, where Allon is called upon to investigate a murder at the Vatican, one with disastrous repercussions that could plunge the world into a conflict of apocalyptic proportions. If you haven't yet been drawn into Daniel Silva's thrilling universe of intrigue, danger, and exceptional spycraft, start here-and see why the Philadelphia Inqurer declares that, "The enigmatic Gabriel Allon remains one of the most intriguing heroes of any thriller series."