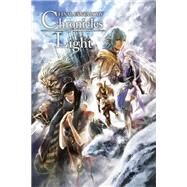 A collection of twenty-five short stories expanding upon the rich lore of Final Fantasy XIV and featuring exclusive illustrations by Toshiyuki Itahana.

This hardcover, foil-stamped volume presents the twenty-one stories originally published on the official Final Fantasy XIV website, including “Tales from the Calamity,” “Tales from the Dragonsong War,” and “Tales from the Storm.” Additionally, it offers four stories written by the development team and appearing for the first time in Chronicles of Light, including “The Hunt Begins,” offering a glimpse into Zenos’s past, and “Ever After,” on Hien and the recovery efforts of Doma. Each story is accompanied by an illustration created specifically for this book by acclaimed Final Fantasy artist Toshiyuki Itahana.
Square Enix, Inc. develops, publishes, distributes and licenses SQUARE ENIX®, EIDOS® and TAITO® branded entertainment content throughout the Americas as part of the Square Enix group of companies. Square Enix, Inc. is affiliated with a global network of leading development studios such as Crystal Dynamics® and Eidos Montréal™. The Square Enix group of companies boasts a valuable portfolio of intellectual property including: FINAL FANTASY®, which has sold over 164 million units worldwide; DRAGON QUEST®, which has sold over 83 million units worldwide; TOMB RAIDER®, which has sold over 85 million units worldwide; and the legendary SPACE INVADERS®. Square Enix, Inc. is a U.S.-based, wholly owned subsidiary of Square Enix Holdings Co., Ltd.