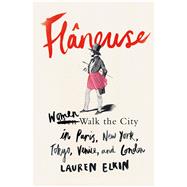 An exhilarating, gender-bending walk through the lives of women who are enlivened by cities

A flâneuse is, in Lauren Elkins words, a determined resourceful woman keenly attuned to the creative potential of the city, and the liberating possibilities of a good walk. Virginia Woolf called it streethaunting, Holly Golightly epitomized it in Breakfast at Tiffanys, and Patti Smith did it in her own inimitable style in 1960s New York.

Part cultural meander, part memoir, Flâneuse traces the relationship between singular women and their cities as a way to map her own lifea journey that begins in New York and takes us to Paris, via Venice, Tokyo, and Londonincluding the paths beaten by such flâneuses as the cross-dressing, nineteenth-century novelist George Sand, the Parisian artist Sophie Calle, the journalist Martha Gellhorn, and the writer Jean Rhys. With tenacity and insight, Elkin creates a mosaic of what urban settings have meant to women, charting through literature, art, history, and film womens sometimes liberating, sometimes fraught relationship to the metropolis.

A native New Yorker, Lauren Elkin has been based in Paris since 2004, and has lived for various periods in London, Venice, Tokyo, and Hong Kong. An award-winning writer, critic, and translator, her essays have appeared in many publications, including The New York Times Book Review, The Guardian, The Times Literary Supplement, The Wall Street Journal, Five Dials, and the Los Angeles Review of Books. She is a contributing editor at The White Review.
What is included with this book?