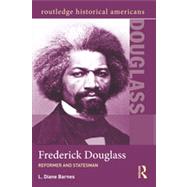 Frederick Douglass was born a slave in Talbot County, Maryland, in February, 1818. From these humble beginnings, Douglass went on to become a world-famous orator, newspaper editor, and champion of the rights of women and African Americans. He was the most prominent African American activist of the 19th century. He remains important in American history because he moved beyond relief at his own personal freedom to dedicating his life to the progress of his race and his country. This volume offers a short biographical exploration of Douglass' life in the broader context of the 19th century world, and pulls together some of his most important writings on slavery, civil rights, and political issues. Bolstered by the series website, which provides instructors with more images and documents, as well as targeted links to further research, Frederick Douglass: Reformer and Statesmangives the student of American history a fully-rounded glimpse into the world inhabited by this great figure. Routledge Historical Americans is a series of short, vibrant biographies that illuminate the lives of Americans who have had an impact on the world. Each book includes a short overview of the person's life and puts that person into historical context through essential primary documents, written both by the subjects and about them. A series website supports the books, containing extra images and documents, links to further research, and where possible, multi-media sources on the subjects. Perfect for including in any course on American History, the books in the Routledge Historical Americans series show the impact everyday people can have on the course of history.
What is included with this book?