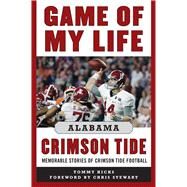 From Harry Gilmer and his excellent play in the 1946 Rose Bowl to Antonio Langham’s heroics in the 1992 game against Florida that led the Crimson Tide to the Sugar Bowl, Alabama has had more than its share of great games, great players, and great moments, including its win over Clemson in the 2015 national championship.

In Game of My Life Alabama Crimson Tide, Tommy Hicks takes readers behind the scenes and onto the field with some of the greatest Crimson Tide players ever. Fans will discover the simple advice and prediction head coach Paul "Bear" Bryant gave his team before the 1967 Auburn game won by quarterback Ken Stabler’s famous "run in the mud." Ken Stabler, Mike Shula, Brodie Croyle, Lee Roy Jordan, Cornelius Bennett, Billy Neighbors, Woodrow Lowe, Joey Jones, Bobby Humphrey, Greg McElroy, and many others all share their memories of the most defining, poignant, and heart-stopping games they ever played in.

Game of My Life Alabama Crimson Tide highlights some of the games and moments that have added to the tradition of Alabama football.
Tommy Hicks is in his 41st year as a newspaper reporter and editor. He is currently editor of the Call News and Washington County News. He previously spent 23 years as a sports reporter and columnist at the Mobile Press-Register and also worked at the Phenix Citizen, the Selma Times-Journal, the Montgomery Advertiser, and the Anniston Star. He is also in his third year as sideline reporter for South Alabama football radio broadcasts. A past president of the Football Writers Association of America, Hicks is a three-time Alabama Sports Writer of the Year winner. He has also twice won the Herby Kirby Award, presented by the Alabama Sports Writers Association for the best sports story of the year. He is a two-time president of the ASWA and has served on its executive board since 1997. The author of two other books, Glory Days: Memorable Games in Alabama Football History and Kickoff: The Story of the University of South Alabama’s Inaugural Football Season, Hicks lives in Mobile with his wife, Julie, and their dog, Sparky. He has a daughter, Maren Hicks.

Chris Stewart is the voice of sportscasting in Alabama. He is a four-time winner of the Alabama Sportscaster of the Year award.