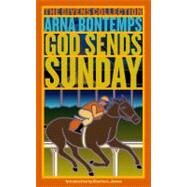 God Sends Sunday is the first of three groundbreaking novels by Arna Bontemps, arguably one of the most versatile black writers of the twentieth century. Bontemps inaugurated his long and remarkable career in the Harlem Renaissance era when he was awarded three poetry prizes and established lifetime kinship with such noted figures as Langston Hughes, Countee Cullen, and Claude McKay.God Sends Sunday was inspired by Arna Bontemps's great-uncle Buddy, whose down-home folk spirit animates this racy story of Little Augie, an irrepressible black jockey of the romantic 1890s. As a frail, undersized youngster, Little Augie leaves his grown sister's home and with luck and charm rises to fame and fortune on the Mississippi River racetrack circuit. But sudden wealth and hopeless rivalry for a beautiful woman change Little Augie's character and set him on a path of self-destruction.Born in 1902 in Alexandria, Louisiana, Bontemps died at Nashville in 1973. He established a legacy of some forty published works for adults, juveniles, and children, including histories, fiction, folklore, and biographies.Bontemps collaborated with Countee Cullen to bring these qualities to a controversial and spectacular production of God Sends Sunday, called St. Louis Woman, originally performed on Broadway in 1946.
What is included with this book?