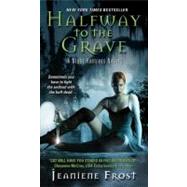 Half-vampire Catherine Crawfield is going after the undead with a vengeance, hoping that one of these deadbeats is her father-the one responsible for ruining her mother's life. Then she's captured by Bones, a vampire bounty hunter, and is forced into an unholy partnership. In exchange for finding her father, Cat agrees to train with the sexy night stalker until her battle reflexes are as sharp as his fangs. She's amazed she doesn't end up as his dinner-are there actually good vampires? Pretty soon Bones will have her convinced that being half-dead doesn't have to be all bad. But before she can enjoy her newfound status as kick-ass demon hunter, Cat and Bones are pursued by a group of killers. Now Cat will have to choose a side . . . and Bones is turning out to be as tempting as any man with a heartbeat.
Halfway to the Grave
A Night Huntress Novel

I stiffened at the red and blue lights flashing behind me, because there was no way I could explain what was in the back of my truck. I pulled over, holding my breath as the sheriff came to my window.

"Hi. Something wrong?" My tone was all innocence while I prayed there was nothing unusual about my eyes. Control yourself. You know what happens when you get upset.

"Yeah, you've got a busted taillight. License and registration, please."

Crap. That must have happened when I was loading up the truck bed. Speed had been of the essence then, not daintiness.

I handed him my real license, not the fake one. He shone his flashlight back and forth between the identification and my face.

"Yes, sir." Politely and blandly, as if I didn't have a care in the world.

"Well, Catherine, it's nearly four A.M. Why are you out this late?"

I could tell him the truth about my activities, except I didn't want to sign on for hard time. Or an extended stay in a padded cell.

"I couldn't sleep, so I decided I'd drive around."

To my dismay, he ambled to the bed of the truck and shone his light in it.

"Whatcha got back there?"

Oh, nothing unusual. A dead body under some bags and an ax.

"Bags of cherries from my grandparents' orchard." If my heartbeat were any louder, it would deafen him.

"Really?" With his flashlight he poked at a plastic lump. "One of 'em is leaking."

"Don't worry." My voice was almost a squeak. "They always leak. That's why I carry them in this old truck. They've stained the bottom of it red."

Relief crashed through me when he ceased his explorations and returned to my window.

"And you're driving around this late because you couldn't sleep?" There was a knowing curl to his mouth. His gaze took in my tight top and disheveled hair. "You think I'm going to believe that?"

The innuendo was blatant and I almost lost my cool. He thought I'd been out sleeping around. An unspoken accusation hung between us, nearly twenty-three years in the making. Just like your mother, aren't you? It wasn't easy being illegitimate in a town so small, people still held that against you. In today's society, you wouldn't think it mattered, but Licking Falls, Ohio, had its own set of standards. They were archaic at best.

With great effort I restrained my anger. My humanity tended to shed like a disposable skin when I got angry.

"Could we just keep this between us, Sheriff?" Back to the guileless blinking of my eyes. It had worked on the dead guy, anyway. "Promise I won't do it again."

He fingered his belt as he considered me. His large belly strained against the fabric of his shirt, but I refrained from comments about his girth or the fact that he smelled like beer. Finally he smiled, exposing a crooked front tooth.

"Go home, Catherine Crawfield, and get that taillight fixed."

"Yes, sir!"Giddy with my reprieve, I revved up the truck and drove off. That had been close. I'd have to be more careful next time.

People complained about having deadbeat fathers or skeletons in their family's closets. For me, both were really true. Oh, don't get me wrong, I hadn't always known what I was. My mother, the only other person in on the secret, didn't tell me until I was sixteen. I grew up with abilities other children didn't have, but when I asked her about them, she'd get angry and tell me not to talk about it. I learned to keep things to myself and hide my differences. To everyone else, I was just weird. Friendless. Liked to wander around at strange hours and had odd pale skin. Even my grandparents didn't know what was in me, but then again, neither did those I hunted.

There was a pattern to my weekends now. I went to any of the clubs within a three-hour drive to look for some action. Not the kind the good sheriff thought I was into, but another brand. I'd drink like a fish and wait to be picked up by that special someone. One I hoped I could end up planting in the backyard, if I didn't get killed first. I'd been doing this for six years now. Maybe I had a death wish. Funny, really, since technically I was half dead.

Therefore my near miss with the law didn't stop me from going out the following Friday. At least this way, I knew I was making one person happy. My mother. Well, she had a right to hold a grudge. I just wished it hadn't spilled over to me.

The club's loud music hit me like a splash, jerking my pulse to its beat. I made my way carefully through the crowds, seeking that unmistakable vibe. The place was packed, a typical Friday night. After I wandered around for an hour, I felt the first stirrings of disappointment. There appeared to be only people here. With a sigh, I sat at the bar and ordered a gin and tonic. The first man who tried to kill me had ordered it for me. It was now my drink of choice. Who said I wasn't sentimental?

Men approached me periodically. Something about being a single young woman screamed "Screw me" to them. Politely and somewhat impolitely I turned them down, depending on how persistent they were. I wasn't here to date. After my first boyfriend, Danny, I never wanted to date again. If the guy was alive, I wasn't interested. No wonder I had no love life to speak of.

After three more drinks I decided to cruise the club again, since I was having no luck being bait. It was nearly midnight, and so far there had been nothing aside from alcohol, drugs, and dancing.

Halfway to the Grave
A Night Huntress Novel. Copyright © by Jeaniene Frost. Reprinted by permission of HarperCollins Publishers, Inc. All rights reserved. Available now wherever books are sold.

Excerpted from Halfway to the Grave by Jeaniene Frost
All rights reserved by the original copyright owners. Excerpts are provided for display purposes only and may not be reproduced, reprinted or distributed without the written permission of the publisher.