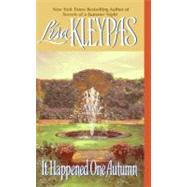 Four young ladies enter London society with one necessary goal: they must use their feminine wit and wiles to find a husband. So they band together, and a daring husband-hunting scheme is born. It Happened at the Ball... Where beautiful but bold Lillian Bowman quickly learned that her independent American ways weren't entirely "the thing." And the most disapproving of all was insufferable, snobbish, and impossible Marcus, Lord Westcliff, London's most eligible aristocrat. It Happened in the Garden... When Marcus shockingly -- and dangerously-swept her into his arms. Lillian was overcome with a consuming passion for a man she didn't even like. Time stood still; it was as if no one else existed...thank goodness they weren't caught very nearly in the act! It Happened One Autumn... Marcus was a man in charge of his own emotions, a bedrock of stability. But with Lillian, every touch was exquisite torture, every kiss an enticement for more. Yet how could he consider taking a woman so blatantly unsuitable...as his bride?
It Happened One Autumn

"The Bowmans have arrived," Lady Olivia Shaw announced from the doorway of the study, where her older brother sat at his desk amid stacks of account books. The late afternoon sun streamed through the long, rectangular stained-glass windows, which were the only ornamentation in the austere, rosewood-paneled room.

Marcus, Lord Westcliff, glanced up from his work with a scowl that drew his dark brows together over his coffee-black eyes. "Let the mayhem begin," he muttered.

Livia laughed. "I assume you're referring to the daughters? They're not as bad as all that, are they?"

"Worse," Marcus said succinctly, his scowl deepening as he saw that the temporarily forgotten pen in his fingers had left a large blot of ink on the otherwise immaculate row of figures. "Two more ill-mannered young women I have yet to meet. The older one, particularly."

"Well, they are Americans," Livia pointed out. "It's only fair that one should give them a certain latitude, isn't it? One can hardly expect them to know every elaborate detail of our endless list of social rules—"

"I can allow them latitude on details," Marcus interrupted curtly. "As you know, I am not the kind to fault the angle of Miss Bowman's pinkie finger as she holds her teacup. What I do take exception to are certain behaviors that would be found objectionable in every corner of the civilized world."

Behaviors? thought Livia. Now, this was getting interesting. Livia advanced farther into the study, a room that she usually disliked, because it reminded her so strongly of their deceased father.

Any recollection of the eighth Earl of Westcliff was not a happy one. Their father had been an unloving and cruel man, who had seemed to suck all the oxygen from the room when he entered it. Everything and everyone in his life had disappointed the earl. Of his three offspring, only Marcus had come close to meeting his exacting standards, for no matter what punishments the earl had meted out, no matter how impossible his requirements or unfair his judgments, Marcus had never complained.

Livia and her sister, Aline, had been in awe of their older brother, whose constant striving for excellence led him to get the highest marks in school, to break all records in his chosen sports, and to judge himself far more harshly than anyone else ever could. Marcus was a man who could break a horse, dance a quadrille, give a lecture on mathematical theory, bandage a wound, and fix a carriage wheel. None of his vast array of accomplishments, however, had ever earned a word of praise from their father.

In retrospect, Livia realized that it must have been the old earl's intent to drive every lingering touch of softness or compassion out of his only son. And it had seemed for a while that he had succeeded. However, upon the old earl's death five years ago, Marcus had proved himself to be a very different man from the one he had been reared to be. Livia and Aline had discovered that their older brother was never too busy to listen to them, and that no matter how insignificant their problems seemed, he was always ready to help. He was sympathetic, affectionate, and understanding—miraculous, really, when once realized that for most of his life, none of those qualities had ever been shown to him.

That being said, Marcus was also a bit domineering. Well . . . very domineering. When it came to those he loved, Marcus showed no compunction about manipulating them into doing what he thought was best. This was not one of his more charming attributes. And if Livia were to dwell on his faults, she would also have to admit that Marcus had an annoying belief in his own infallibility.

Smiling fondly at her charismatic brother, Livia wondered how it was that she could adore him so when he bore the physical stamp of their father so strongly. Marcus had the same harsh-hewn features, broad forehead, and wide, thin-lipped mouth. He had the same thick, raven-black hair; the same bold, broad nose; and the same stubbornly jutting chin. The combination was striking rather than handsome . . . but it was a face that attracted female gazes easily. Unlike their father's, Marcus's alert dark eyes were often filled with glinting laughter, and he possessed a rare smile that flashed startling white in his swarthy face.

Leaning back in his chair at Livia's approach, Marcus laced his fingers together and rested them on the hard surface of his stomach. In deference to the unseasonable warmth of the early September afternoon, Marcus had removed his coat and rolled up his sleeves, revealing muscular brown forearms lightly dusted with black hair. He was of medium height and extraordinarily fit, with the powerful physique of an avid sportsman.

Eager to hear more about the aforementioned behaviors of the ill-bred Miss Bowman, Livia leaned back against the edge of the desk, facing Marcus. "I wonder what Miss Bowman did to offend you so?" she mused aloud. "Do tell, Marcus. If not, my imagination will surely conjure up something far more scandalous than poor Miss Bowman is capable of."

Like most men, Marcus didn't seem to understand that nothing torched the flames of a woman's curiosity more violently than a subject that one was not at liberty to discuss. "Out with it, Marcus," she commanded. "Or I shall make you suffer in unspeakable ways."

One of his brows lifted in a sardonic arch. "Since the Bowmans have already arrived, that threat is redundant."

"I'll make a guess, then. Did you catch Miss Bowman with someone? Was she allowing some gentleman to kiss her . . . or worse?"

Marcus responded with a derisive half smile. "Hardly. One look at her, and any man in his right mind would run screaming in the opposite direction."

It Happened One Autumn. Copyright © by Lisa Kleypas. Reprinted by permission of HarperCollins Publishers, Inc. All rights reserved. Available now wherever books are sold.

Excerpted from It Happened One Autumn by Lisa Kleypas
All rights reserved by the original copyright owners. Excerpts are provided for display purposes only and may not be reproduced, reprinted or distributed without the written permission of the publisher.