Hard White The Mainstreaming of Racism in American Politics 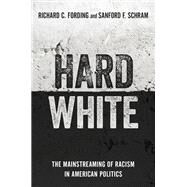 The white nationalist movement in the United States is nothing new. Yet, prior to the 2017 "Unite the Right" rally in Charlottesville, Virginia, many Americans assumed that it existed only on the fringes of our political system, a dark cultural relic pushed out of the mainstream by the victories of the Civil Rights Movement. The events in Charlottesville made clear that we had underestimated the scale of the white nationalist movement; Donald Trump's reaction to it brought home the reality that the movement had gained political clout in the White House. Yet, as this book argues, the mainstreaming of white nationalism did not begin with Trump, but began during the Obama era.

Hard White explains how the mainstreaming of white nationalism occurred, pointing to two major shifts in the movement. First, Barack Obama's presidential tenure, along with increases in minority representation, fostered white anxiety about Muslims, Latinx immigrants, and black Americans. While anti-Semitic sentiments remained somewhat on the fringes, hostility toward Muslims, Latinos, and African Americans bubbled up into mainstream conservative views. At the same time, white nationalist leaders shifted their focus and resources from protest to electoral politics, and the book traces the evolution of the movement's political forays from David Duke to the American Freedom Party, the Tea Party, and, finally, the emergence of the Alt-Right. Interestingly it also shows that white hostility peaked in 2012--not 2016.

Richard C. Fording and Sanford F. Schram also show that the key to Trump's win was not persuading economically anxious voters to become racially conservative. Rather, Trump mobilized racially hostile voters in the key swing states that flipped from blue to red in 2016. In fact, the authors show that voter turnout among white racial conservatives in the six states that Trump flipped was significantly higher in 2016 compared to 2012. They also show that white racial conservatives were far more likely to participate in the election beyond voting in 2016. However, the rise of white nationalism has also mobilized racial progressives. While the book argues that white extremism will have enduring effects on American electoral politics for some time to come, it suggests that the way forward is to refocus the conversation on social solidarity, concluding with ideas for how to build this solidarity.


Sanford F. Schram is Professor of Political Science at Hunter College and Professor of Sociology at the Graduate Center, City University of New York.
What is included with this book?