Heidegger's Polemos : From Being to Politics 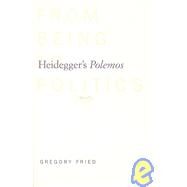 Gregory Fried offers in this book a careful investigation of Martin Heidegger's understanding of politics. Disturbing issues surround Heidegger's commitment to National Socialism, his disdain for liberal democracy, and his rejection of the Enlightenment. Fried confronts these issues, focusing not on the historical debate over Heidegger's personal involvement with Nazism, but on whether and how the formulation of Heidegger's ontology relates to his political thinking as expressed in his philosophical works.

The inquiry begins with Heidegger's interpretation of Heraclitus, particularly the term polemos ("war", or, in Heidegger's usage, "confrontation"). Fried contends that Heidegger invests polemos with broad ontological significance and that his appropriation of the word provides important insights into major strands of his thinking -- his conception of the human being, understanding of truth, and interpretation of history -- as well as the meaning of the so-called turn in his thought. Although Fried finds that Heidegger's politics are continuous with his thou

Gregory Fried is assistant professor of philosophy and humanities at Boston University.
What is included with this book?