Hemingway in His Own Country 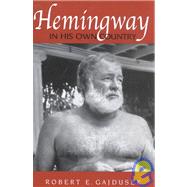 Hemingway in His Own Country, an outstanding collection of essays from noted Hemingway scholar Robert Gajdusek, delivers to the reading public and scholarly world a new and much needed rereading of one of America's greatest writers. Gajdusek attempts to shift attention away from Hemingway's adventurous life and toward the intricate and demanding modernist texts he wrote. Hemingway was both a great craftsman and an extremely well-read author. His complex message and highly sophisticated technique have been largely lost on a reading audience overwhelmed by the myth of the man. Hemingway the artist, Gajdusek argues, remains comparatively unknown.

Hemingway in His Own Country traces outside influences on Hemingway during his time in Paris in the early 1920s. Among his close friends and associates at that time were James Joyce, Ezra Pound, Gertrude Stein, Ford Madox Ford, and F. Scott Fitzgerald -- he was very much a part of the heady movements and intellectual idealism of his era. Joyce, like the other four, even went over Hemingway's manuscripts with him -- a se