Hope and Other Luxuries A Mother's Life with a Daughter's Anorexia 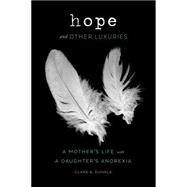 As heard on NPR's Diane Rehm Show!
Clare Dunkle seemed to have an ideal life—two beautiful, high-achieving teenage daughters, a loving husband, and a satisfying and successful career as a children's book novelist. But it's when you let down your guard that the ax falls. Just after one daughter successfully conquered her depression, another daughter developed a life-threatening eating disorder. Co-published with Elena Vanishing, the memoir of her daughter, this is the story—told in brave, beautifully written, and unflinchingly honest prose—of one family's fight against a deadly disease, from an often ignored but important perspective: the mother of the anorexic.
Clare B. Dunkle is an award-winning author of seven acclaimed fantasy and science fiction novels, including The Hollow Kingdom Trilogy, the first book of which was a winner of the 2004 Mythopoeic Fantasy Award for Children's Literature. A Texan (and former Texas librarian), Clare now lives in Germany, but travels often to the United States to see her family, especially her two daughters, Valerie and Elena, and her grandchildren. Find out more about Clare at www.claredunkle.com.
What is included with this book?