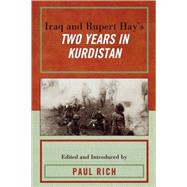 Detailing two years in the life of a British political officer charged with establishing and maintaining British rule in the Kurdish district of Arbil in Iraq, this personal account provides a thorough discussion of Kurdish society from the viewpoint of Captain William Rupert Hay. Chronicling the British government's desperate attempts to establish a civil administration in Iraq just after World War I, Two Years in Kurdistan shows how, as member of the Indian Political Service, Captain Hay attempted to bring British rule to his corner of Iraq.
What is included with this book?