Islam in South Asia in Practice 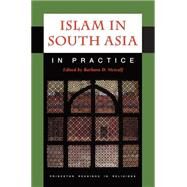 This volume of Princeton Readings in Religions brings together the work of more than thirty scholars of Islam and Muslim societies in South Asia to create a rich anthology of primary texts that contributes to a new appreciation of the lived religious and cultural experiences of the world's largest population of Muslims. The thirty-four selections--translated from Arabic, Persian, Urdu, Bengali, Tamil, Gujarati, Hindavi, Dakhani, and other languages--highlight a wide variety of genres, many rarely found in standard accounts of Islamic practice, from oral narratives to elite guidance manuals, from devotional songs to secular judicial decisions arbitrating Islamic law, and from political posters to a discussion among college women affiliated with an "Islamist" organization. Drawn from premodern texts, modern pamphlets, government and organizational archives, new media, and contemporary fieldwork, the selections reflect the rich diversity of Islamic belief and practice in South Asia. Each reading is introduced with a brief contextual note from its scholar-translator, and Barbara Metcalf introduces the whole volume with a substantial historical overview.