The Jew And The Other 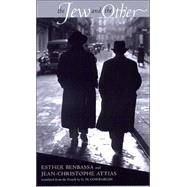 In the current situation of polarization in the Middle East, it is easy to lose sight of the fact that a long tradition of dialogue and openness toward the "Other" exists in many strands of Jewish thought. Himself or herself the quintessential Other in a world in which she or he has existed dispersed, in exile, as a minority, the Jew has consistently envisioned the self in relation to surrounding societies. Esther Benbassa and Jean-Christophe Attias show that alterity is a useful and morally compelling notion with which to structure Judaism's historically specific and politically charged encounters with deity, femininity, the Christian West, and the Muslim East. In Benbassa and Attias's view, the Other may be rejected, but it is also a mirror, both reminding the Jew of ethical duties and constituting a source of temptation and danger. Sometimes, the authors find, the Other is the enemy. They note that it is with the enemy that peace is made, peace with the Other and peace with the self. The Jew and the Other, which is an extended commentary on a dozen Biblical verses and which follows the five books of the Pentateuch, offers the history of that encounter as an inextricable part of the Jewish condition and is itself a meditation on this encounter.
What is included with this book?