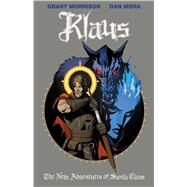 An ageless ice queen commanding an army of robotic snowmen built of enchanted wood. An evil soda corporation hellbent on trademarking Christmas itself at the behest of a dark doppelganger. It’s all just another day in the life of Klaus, the man who became Santa Claus.

Luminary author Grant Morrison (All-Star Superman, Happy!) and Eisner Award-winning illustrator Dan Mora (Saban's Go Go Power Rangers) bring their lauded reinvention of Santa Claus fully into the 21st century with two modern tales of Klaus saving Christmas from sinister threats that span dimensions.
Grant Morrison, MBE is a Scottish comic book writer and playwright. They are known for their nonlinear narratives and countercultural leanings in their runs on titles including DC Comics's Animal Man, Doom Patrol, Batman, JLA, Action Comics, All-Star Superman, Green Lantern, The Flash, Vertigo's The Invisibles, and Fleetway's 2000 AD. They have also served as the editor-in-chief of Heavy Metal and currently operate as an adviser for the magazine. They are the co-creator of the Syfy TV series Happy! starring Christopher Meloni and Patton Oswalt. Morrison is also an occasional actor, with their most recent appearance being a brief cameo as a news broadcaster in the 2017 horror comedy film Mom and Dad, which starred Nicolas Cage and Selma Blair.

Dan Mora is an artist whose work includes Buffyverse comics from Boom! Studios.