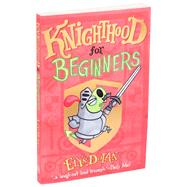 Meet Dave (a dragon who wants to become a knight) and his trusty steed (a German-speaking, worldly goat named Albrecht) in this illustrated, laugh-out-loud chapter book.

Dave is terrible at all the things dragons are supposed to be good at: hoarding gold, eating villages, telling riddles...and don’t even ask about his knitting skills. So when he becomes the first dragon ever to fail the Dragon Test, he finds a book called Knighthood for Beginners and decides he’s found his destiny! Before long, Dave is decked out in a new suit of armor and is off on a series of adventures with his trusty steed—a German-speaking life coach, explorer, and goat named Albrecht. The ultimate goal? Dave the dragon being knighted by the King of Castletown.

From start to satisfying finish, this page-turner by Elys Dolan is a fresh and extremely funny new voice in chapter books. Black-and-white illustrations by the author help bring all the hilarity to life, and there’s even a glossary of Albrecht’s German expressions.