Labour of Love : The "Partly-Political" Diary of a Cabinet Minister's Wife 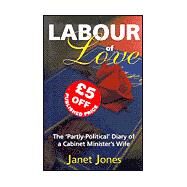 Married to Lord Richard who became Leader of the House of Lords in Tony Blair's first cabinet, Janet Jones gives a unique insight into life at the centre of the New Labour government.
Janet Jones tells of the manoeuvring that characterised Labour's first year in power. She takes the reader through the Lord Chancellor's residence and into the cabinet room and goes on to describe the shock of her husband being unceremoniously sacked from the cabinet in Tony Blair's first reshuffle.
What is included with this book?