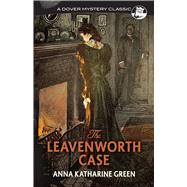 "First published in 1878, nine years before the debut of Sherlock Holmes in A Study in Scarlet, this atmospheric and suspenseful mystery well deserves a modern audience." — Publishers Weekly
Horatio Leavenworth, a wealthy merchant and pillar of nineteenth-century New York society, has been found shot to death in his Fifth Avenue mansion. Circumstances point to a member of his household as the killer and particularly to his lovely nieces, one of whom will inherit his fortune. The idea of a lady murderer, especially one of the Leavenworths' social stature, is almost too shocking to entertain, although the evidence — a broken key, an incriminating letter, and an overheard snatch of conversation — points toward the young nieces. But which one?
This brilliantly plotted tale of love, greed, sacrifice, and betrayal introduced the first American series detective, Ebenezer Gryce, and is widely considered the first full-length detective story written by a woman. The suspenseful bestseller is credited with attracting writers to a genre previously considered unworthy of serious literary attention. It remains not only a fascinating whodunit but also an absorbing look at nineteenth-century mores and manners.
When aspiring poet Anna Katharine Green (1846–1935) failed to gain recognition for her verse, she wrote her first and best-known novel, The Leavenworth Case, published in 1878. "The mother of the detective novel," Green wrote in a variety of genres, publishing about 40 books, and was among America's first writers of detective fiction.

BOOK I. THE PROBLEM

XVI. THE WILL OF A MILLIONAIRE

XVII. THE BEGINNING OF GREAT SURPRISES

XVIII. ON THE STAIRS

XIX. IN MY OFFICE

XXIII. THE STORY OF A CHARMING WOMAN

XXIV. A REPORT FOLLOWED BY SMOKE

XXXIX. THE OUTCOME OF A GREAT CRIME